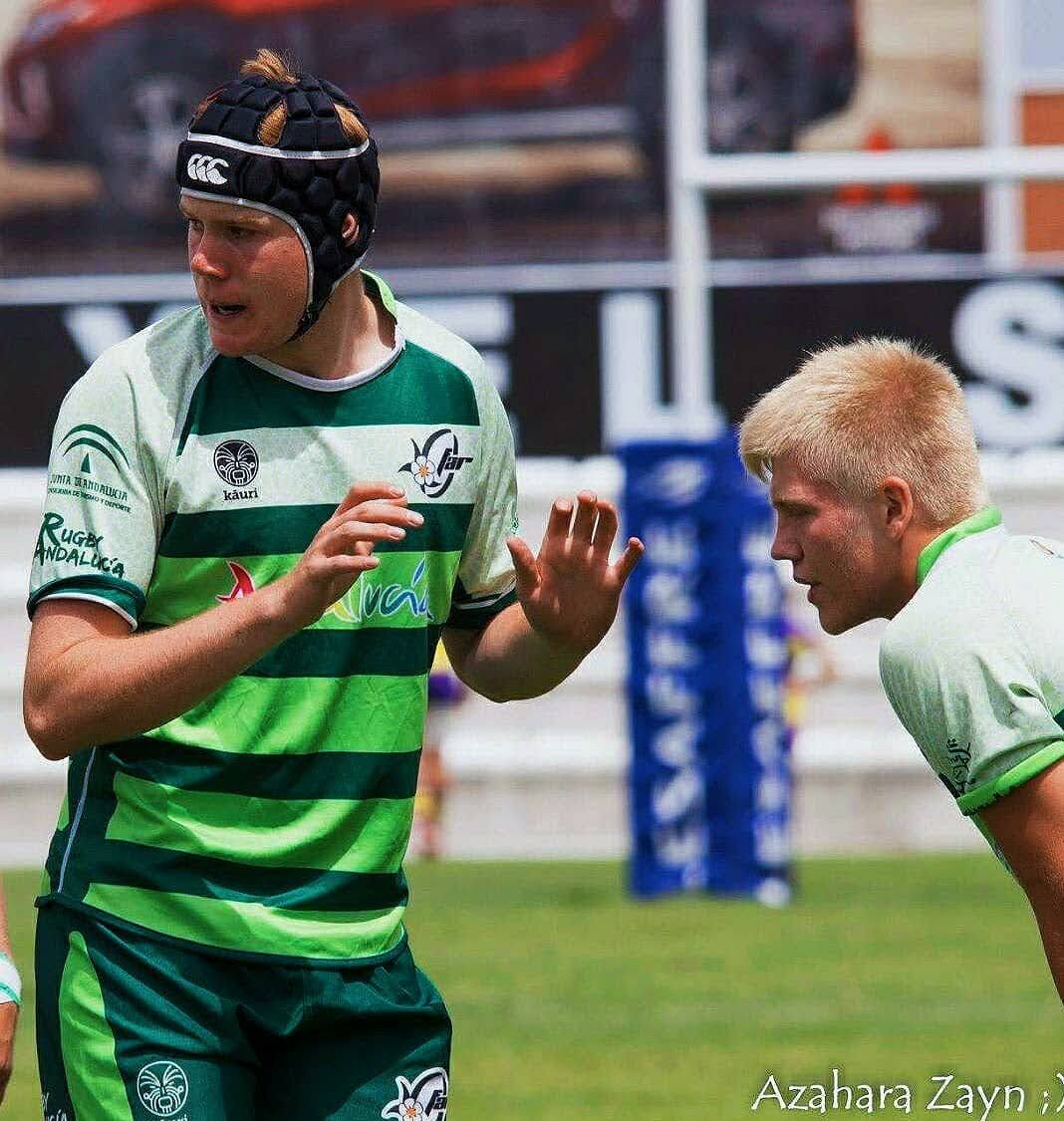 English blood runs through his veins and a lot of rugby, good rugby. He belongs to the fourth generation of great players in his family. His great-grandfather, Hugh Glyn Hughes, was one of the founders of the Barbarians, a prestigious invitation-only rugby team based in Great Britain, as well as captain of the EXETER CHIEFS. His grandfather, Michael Hughes, was also captain of the CHIEFS and his father, Pablo Borondo García, player and manager of  Club Amigos del Rugby Sevilla (CAR).
He is Jaime Borondo Hughes, also known as Cerilla (matchstick, due to his red hair), a high level academy player. He started out with eight years in the Bucaneros (a local village rugby club near Seville) and has been with CAR for nine years now. He has been part of the Club since 2011. He is 17 years old now and is studying the second year of secondary school at The International School of Andalucía in Sanlúcar La Mayor (Seville).
Last year, City of Oxford College, a school that belongs to the Wasps Rugby Academy, granted him a scholarship to study for two years and play in the Wasps Academy. During his English trip, Borondo was lucky enough to play for another well-known team in the city: Oxford Harlequins.
The pandemic interrupted his studies abroad and in March he returned home, to CAR, his lifelong club, to train in the San Pablo grounds with his family. He has just returned from Valladolid after having been called up by the Spanish National Rugby Team for the  U18´s stage. Get to know this multipurpose redhead, who is on the pitch with the soul of a champion.

What did you feel when you were called up to join the Spanish U19´s National Rugby Team?
I felt great happiness, and that all hard work had given its fruit. I am grateful to the coaches for giving me the opportunity of  joining the Valladolid stage. Also, to all those who, directly or indirectly, have helped me get here.
How have those six days in Valladolid been?
They have been hard and intense, but I have enjoyed them to the fullest. I have learnt a lot from this great experience.
What has been the best thing about this experience?
Seeing my teammates again and meeting great players and great people.
Who won the game you played on the last day of the camp?
During the stage, we were divided into two teams: red and blue. I was on the blue team and this was the one that won.
What have you learnt from this sport?
Many things. One of them is that it requires a lot of sacrifice and extra effort.
You have rugby running through your veins. Can you tell us about your first memory?
When my uncle gave me my first rugby ball. It was on a Christmas day that we celebrated at my house. From that afternoon I never separated from that ball.
A message to your friends at CAR?
To keep on fighting, to achieve our goals as a club. This  is going to be a great year for all of us. ¡¡¡¡VIVA el CAR!!!! and WAITER, waiter…
Is there any gift that you keep with special affection?
A ball that my colleagues gave me, signed by all of them, when I had ear surgery. It was a very special gift.
What did they tell you at your great-grandfather’s house, the founder of the Barbarians, about him?
That he was a great person and a great English military man. He lived through both World Wars and liberated a Nazi concentration camp in the Second World War. As far as rugby is concerned, he was a great player and captain of the EXETER CHIEFS.
The best advice that your father, who is closely linked to CAR, has given you?
That I should not be afraid of myself and that I should believe in myself, so that I can give my best on the pitch.
And in life?
That I am capable of everything I set out to do.
What would be the qualities you think a rugby player should have?
He has to be committed to his team. He must also keep in mind that this sport requires a lot of sacrifice and he must know how to make the most out of his time.
You had to return from England in March because of the pandemic. What does a young person like you think about what has happened to the world?
It’s a very strange situation. Nobody expected something like this to happen. It’s been a very hard time.
The best reading you get from 2020?
That despite the problems that exist, we have to move forward. Being more united than ever, we will go forward and overcome this.
How many hours do you train a day?
Due to the current situation I have fewer available hours, although most times I try to train 4 or 5 days a week, an hour or an hour and a half.
What does Rugby bring to your life?
A lot of things. Organization, passion, and a different meaning to my life since a big part of it is rugby.
What are your sporting goals?
One of my dreams is to be able to play rugby while studying and not having to pay for it. In a way, to be able to live and study thanks to rugby.
Do you already know what you want to study?
I’m not sure yet, but I’m leaning more towards engineering.
Where do you see yourself in ten years’ time?
With a stable job and playing for CAR  Sevilla in the Spanish First Division.
Do you have any talismanic phrase before starting a match?
Not exactly a talismanic phrase, but I always like to listen to music whilst I am arriving to the pitch, put on my shirt and boots. I usually listen to WING and 21 QUESTIONS.

INTERVIEW. Jaime Borondo Hughes: «Rugby gives me a lot: discipline, passion and a different meaning to my life»